FDR and the environment

The Journal of Land Use and Environmental Law recently published an extended review by Michael Blumm of Douglas Brinkley's Rightful Heritage: Franklin D. Roosevelt and the Land of America (HarperCollins, 2016). The abstract: 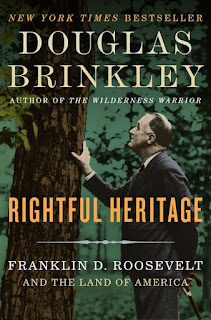 Douglas Brinkley, biographer of Theodore Roosevelt and his environmental legacy, has produced a sequel on his distant cousin, Franklin Delano Roosevelt (FDR). In a comprehensive ecobiography, Brinkley shows in some detail how committed an environmentalist FDR was, protecting federal lands, encouraging state conservation efforts, making wildlife protection a national priority, and dedicating the federal government to soil protection and forest replanting. Although FDR’s romance with federal dams undercuts the assertion somewhat, the Brinkley biography successfully shows that FDR has a legitimate claim to being the foremost of environmental American presidents.