Sorry for the slow pace of postings - no, I haven't been hitting the Madeira; I'm in the middle of a heavy semester teaching-wise, and on a short deadline for an article, etc. I'd be more than happy, as always, to post pieces by others, especially those of you whose semester is ending soon. Please let me know if you're interested.

In the meantime, here's a bit on the latest post on Rachel Laudan's food history blog, "Trade, Trust and Madeira", a post with both environmental and legal angles. Laudan connects the drinking of Madeira wine to Enlightenment theories of trade and sociability. Laudan writes: 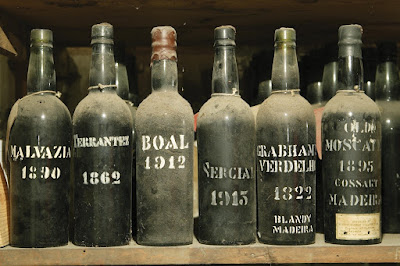 I just want to highlight how trade, trust and Madeira reinforced each other.  The wine became Madeira’s most important export around 1700.  By then, sugar, which had been the main export for over a hundred years, the forerunner of the sugar plantations of the New World, had exhausted the soils. For the next two hundred years, Madeira flourished.

Producing and trading Madeira was no easy game. Complex irrigation projects were put in place. The wine was fortified with spirits to survive the long sea journeys. In an extraordinary turn of events, wine that had been shipped to India and for some reason made the return journey instead of being ruined, tasted particularly “mellow.”

The Americans, who in spite of their most determined efforts, failed to establish a wine industry in the Colonies, were particularly eager traders and consumers, though far from the only ones.

Here’s the thing. Living in the United States, where Amazon deliveries arrive on time and are left on doorsteps, we happily get on the internet, commit our money, secure in the expectation that the strangers who pack the goods, debit the cards, fly the planes, and drive the trucks will all act responsibly. My neighbors are shocked if packages left on the porch disappear. Yet I’ve lived in plenty of places where no one commits any important documents to the mail or orders anything to be delivered.  That chain of trust just does not exist.

Chains of trust have been built up over time. There’s lots of interesting historical work going on now about how merchants built trust along huge networks, the role of families and tightly knit religious or ethnic groups, the types of contracts, and the importance of correspondence.  Wine, like other valuables, had always been shipped long distances (the Romans sent wine to eager drinkers in northern Europe, for example, with Madeira the distances and cultures involved were on a whole new scale, stretching around the Cape to India and Southeast Asia, up to Scotland, across to the Caribbean and the American Colonies.

Part of that trust was building shared customs, civility, ways of comporting yourself among strangers. Drinking Madeira was one of these customs. Along with the wine itself went barrels, labelled bottles (a novelty because not stoneware), delicate glasses and decanters which, as Hancock puts it, “dripped both wealth and politesse.”

Passed from hand to hand, they helped bond political factions, merchant networks, and intellectual circles in gatherings in the home, in taverns, in messes, in clubs around the world.