Environmentalism of the Rich

Public Books recently ran a review by Max Holleran of  Peter Dauvergne's Environmentalism of the Rich (MIT Press, 2016). Holleran writes that the book


traces the shifting tactics of mainstream environmentalism from the radicalism of the 1970s to the corporate partnerships of the 1990s, in which companies accomplished incremental changes through in-house consultations with groups like the Sierra Club. It details how many green groups began as firebrand protectors of the earth, deeply inspired by indigenous movements that opposed the sale and commodification of nature, but have since morphed into something akin to compliance departments for large companies. 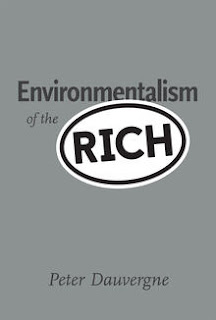 Green movements of the Global North and the Global South are markedly different; within that divide, unique national experiences have produced a variety of environmentalisms, some of which do not even use the name and prefer to align with indigenous rights or class-based movements. The 1970s environmental movement came of age during a time of decolonization, and many pioneers of the movement were allies of nations in the Global South seeking both political independence and more autonomy within the global economy. Dauvergne shows that most resource extraction has imperial roots, when European powers saw the wider world as a zone for the collection, and often pillage, of raw materials. The “green” decolonization movement was fundamentally anti-capitalist; it suffered when many Global North environmentalists chose to advocate for a green economy, rather than a new economy based on rethinking global trade.

Holleran writes that the book argues that increased environmental awareness has not necessarily translated into increased regulation. Rather,


major EPA regulatory victories were made in the 1970s and have not enjoyed similar wins for a generation. Under President Trump, the EPA stands to get even weaker, if not disappear altogether. The new environmentalism is also less legislatively engaged. It is far more focused on individual behavior and buying habits rather than the state’s role in mitigating environmental risks like pollution. The individualizing of environmental responsibilities follows the market orthodoxy that consumers will shape policy on their own through their choices, and that the best thing for regulators to do is step back. But that theory doesn’t hold water when we consider the huge asymmetry in information that companies have over consumers in terms of knowledge about the chemical makeup of their products and the supply chains that created them.

The generation of Ralph Nader used proactive corporate lawsuits to produce a regulatory environment in which local and state governments were forced to do more to protect public safety. But campaigns against the “nanny state” have halted this trend, sometimes with copious amounts of money from the very companies involved in pollution—such as the massive conglomerate Koch Industries, which has emerged as a kingmaker in right-wing politics urging zealous deregulation.