The latest American Historical Review has a review by Jeff Horn of Kieko Matteson's Forests in Revolutionary France: Conservation, Community, and Conflict, 1669–1848 (Cambridge UP, 2015). Horn writes:


Matteson is at pains to demonstrate that over the long term, “peasant communities and practitioners of customary rights” retained “significant control over their forests” “through tenacity, wiliness, and sheer violence” (xv). 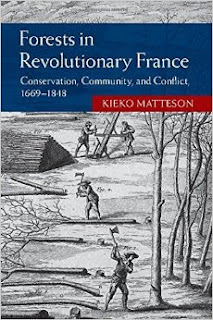 In an introduction, six long but fast-moving chapters, and a lengthy epilogue, Matteson considers the relationship of states, various types of property owners (such as seigneurs), and communities to forests, their management, and their economic exploitation.... Conservation is a major theme, particularly its intellectual foundations in Enlightened natural philosophy that Matteson refers to as a “formative period in the development of French environmental discourse and conservationist policy” (50). These ideas are then traced across subsequent regimes. Shifts in state oversight of the forests, mostly negative, form the spine of this book. Jean-Baptiste Colbert’s 1669 forest ordinance is at the heart of the first chapter, the “failure” of the changes made by the Revolutionaries in 1789–1791 is the focus of chapter 4, and the background and reception of the Forest Code of 1827 are the subjects of chapters 5 and 6.

Matteson makes three main arguments. First, she asserts that “peasant opposition to state forest policies produced greater gains than previously appreciated, even when it was crushed at the time.” Matteson also claims that the French environmental conservation had less to do with ecology “than with extending state power, suppressing sedition, and substituting commercial exploitation for communal utility.” Third, she maintains that “local, community-based arrangements for the management and use of natural resources … have been unfairly maligned, both in the historiography of the Revolution and in contemporary policymaking” (10–11)....

Matteson depicts overmatched communities’ heroic and legitimate resistance to the growing intervention of the state in favor of its own interests and on behalf of a proprietary individualism that favored economic and political elites at the expense of the community and its poorest members....

Matteson portrays the Revolution and those nineteenth-century figures who implemented its ideas negatively for emphasizing private property (e.g., 254–255). This interpretative line rests both on the mistakes or failures inherent in legislation and on the difficulties of implementing the actions of the centralizing state because of communal resistance. According to Matteson, this combination of failed legislation and unsuccessful local resistance leading to ever greater power and wealth for elites shaped environmental debate and conservation policy....

The epilogue considers the legacy of the chief development of the two hundred plus years discussed in the book. Matteson argues that by the late nineteenth century, “Colbert’s vision of a commanding state presence in the nation’s forests, geared to assuring the country’s broader economic and strategic well-being, would appear to have finally been realized not only in France but increasingly around the world as well” (252). She then describes how a more conservationist policy slowly emerged before concluding with a tribute to the benefits of communal modes of ecological management of forests (261–263).