I've long thought that the New Deal era doesn't get its rightful due as a critical phase in the history of environmental law. It seems Douglas Brinkley's new book, Rightful Heritage: Franklin D. Roosevelt and the Land of America (Harper Collins, 2016), makes a similar argument. As one would expect for a Brinkley book, it's already been reviewed by the New York Times and Washington Post.

Clay Risen in the Times puts the emphasis on the supposed tension between environmental protection and economic growth. Dennis Drabelle in the Post is a little more sensitive to legal history, writing that "Brinkley can be superficial when it comes to legal issues — it’s not always clear what authority FDR is drawing on when he takes a pro-environmental stance". Drabelle writes of the Duck Stamp Act:


Brinkley is good at showing how strands of Roosevelt’s life united to shape approaches to preservation that other presidents might have missed. Take an idea to raise money for waterfowl conservation which had been working its way through Congress. It culminated in the Duck Stamp Act of 1934, which requires all waterfowl hunters over 16 to buy, in addition to a state hunting license, a federal stamp, the proceeds from which go to acquiring wetlands and funding wildlife refuges. As a lifelong philatelist, Roosevelt “loved stamps too much to allow each year’s duck issue to be anything but irresistible.”

Roosevelt was a great believer in bipartisanship, and the director of what was then the Biological Survey in the Agriculture Department (now the U.S. Fish and Wildlife Service in the Interior Department) was Jay Norwood “Ding” Darling, a Republican who, in his previous job as a Pulitzer Prize-winning editorial cartoonist, lampooned the Democratic president repeatedly. At FDR’s request, Darling designed the first duck stamp, featuring “two striking mallards in flight descending on a lake.” From this literally splashy beginning evolved a much-anticipated annual contest — still being held — in which wildlife artists vie to submit the winning design (and to rake in the income generated by fans who buy reproductions). In addition to excitement and artistry, the program has generated more than $500 million through 2009, which has been used to purchase 5 million acres of waterfowl habitat. 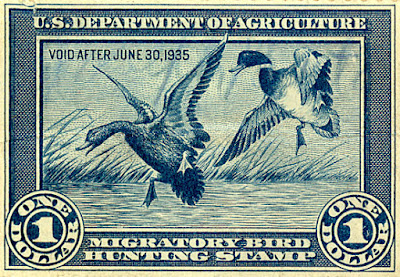 The Duck Stamo program is still running. For all the stamps, see here.
Posted by David Schorr at 12:31 PM