(Adam Wolkoff's second post on teaching the history of law and the environment. Links to the rest of the posts are here.)

Environmental history courses present fascinating questions about scale. Ted Steinberg’s synthetic Down to Earth (2012), which I use as my primary textbook, opens on a geological time frame, asking readers to think about how the latitudinal orientation of North America, the evaporation of its great inland sea, the rise of the continental divide, and the journeys of glaciers shaped the rise of its civilizations. But the core of his narrative are case studies of how ordinary people like fishermen, poachers, coal miners, and farmers understood their connection to nature. 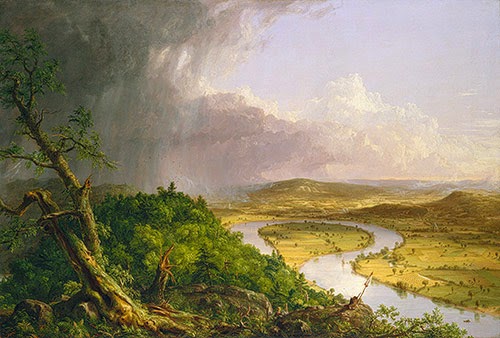 Nineteenth-century Hudson River School paintings, like Thomas Cole’s View from Mount Holyoke, Northampton, Massachusetts, after a Thunderstorm—The Oxbow (1836) nicely illustrate the question of scale. These are not impressionistic landscapes: foreground and background are rendered in crisp detail, and the viewer decides whether to linger on the details of the artist’s painting kit or to widen his or her

view of the magnificent scenery. But Cole’s decision to take in everything the human eye could see from Mount Tom strongly directs the viewer’s attention toward the wider scale, in which unseen farmers have deforested, gridded, and cultivated a floodplain.

The scope of an environmental history class is also a pressing subject. As an Americanist, I structure the course around a survey of the major events shaping the place we now call the United States. In other words, what were the connections between law and nature in Colonial New England, or along the Erie Canal during its years of industrial development? Most students come to class with a basic timeline of these events in their heads, so the class offers an opportunity to deepen their appreciation of these changes as legal and environmental events.

An alternative approach would be to gather case studies of environmental phenomena across global regions and compare how different societies regulated those conditions. Comparing land tenure systems is a classic way to understand a social and political order, as are histories of water, forestry, and sub-surface mining rights. But because of the multiple interdisciplinary challenges of teaching a globally-oriented course—comparative history and law—teaching this course in a coherent way demands a collaborative synthesis across many fields, which, to my knowledge, does not exist: history, law, anthropology, sociology, environmental science, and other sources of customary environmental practice.


And then there is the vexing question about what it means to teach law. Environmental historians and legal historians are passionate about the technical intricacies of their subjects, while conscious of the limits of their fields’ definitional categories. Nature is not the world without humans, but is fundamentally shaped by people and shapes their behavior in turn. Law is not the opposite of lawlessness; both are contingent and mutually constitutive ideas grounded in the circumstances of a time and place. All of which opens up the circularity of “natural law”: can nature define a social order if humans defined nature?

Once I started looking for it, I found nature, order and disorder in everything I read. So my teaching materials incorporate a mixture of formal and informal sources of law. Students read appellate decisions on land and water rights and the power of the government to zone and regulate the economy and the environment, along with nineteenth-century ordinances and twentieth-century regulations. But they also see negotiations over nature in conflicts between settlers and indigenous people over grazing rights, or between landlords and tenants over the proper husbandry of the land. I also enjoy using visual evidence of law and order, such as Cole’s Oxbow, asking students to think about how the farmers in this painting organized land use, what risks they took when they planted this way, and what Cole, sitting on his mountain, might have thought about it.