Rachelle Adam has brought to my attention the release by Yale University Press of The Snail Darter and the Dam: How Pork-Barrel Politics Endangered a Little Fish and Killed a River by Zygmunt JB Plater, who represented opponents of the Tellico Dam in TVA v Hill. The case is famous for the US Supreme Court's uncompromising stance in prohibiting completion of a dam that would endanger a small and not particularly charismatic fish, the snail darter. However the drama, and the legal, environmental, political, and social issues raised, were considerably broader.

From the book's flyer:


The snail darter story has become an iconic episode in modern American history, a classic case regularly voted one of the nation’s top three Supreme Court environmental decisions, but also enjoying dubious public notoriety as “The Most Extreme Environmental Case Ever,” where a TINY fish stopped a GIGANTIC hydro-electric project! Ecology vs. Economics ! Endangered Fish vs. People !

But it wasn’t a hydro-electric dam! The small TVA project had two main purposes: “Recreation,” and a hypothetical “Model Industrial City” condemning 300+ family farms for re-sale by the Boeing Corporation! — a dysfunctional project from the start.

Only in America could this kind of fish story happen: the farmers, Cherokee Indians, trout fishermen, local conservationists, and the author and his students carry the snail darter’s endangered species crusade against TVA’s Tellico Dam through the Supreme Court, the first-ever “God Committee,” and all the political dysfunctions of modern government—jaded congressional tribalism, monolithic lobbying on Capitol Hill and in federal agencies, unthoughtful “infotainment” media and skewed public opinion.

Telling the story beyond the court case, the book describes how in the American system of governance a small group of citizens sorely lacking in financial and political support could work their way through the corridors of national power and the federal courts, struggling to bring to justice an economically irrational, environmentally destructive pork-barrel project.

It’s a parable that highlights the strengths, idiosyncrasies, perils, and needs of our vexed modern systems of democratic governance. Exactly contrary to its reputation as a symbol of irrational extremism, the little fish was an avatar of common sense, a political and economic “canary-in-the-coal-mine”—though pork-barrel politics and media ultimately overrode the fish’s truth..

The book is a reminder of the power of the (often inaccurate) stories told about environment and the law, though the book will hopefully help correct misunderstandings (and distortions) about this particular case. For instance, contrary to the case's symbolizing the elevation of protecting endangered species above other economic and social considerations, even the so-called "God Committee" created by federal law to allow exemptions to endangered species protection voted unanimously in this case that the project's costs outweighed its benefits and therefore no exemption was warranted. The Endangered Species Act and the court decision were overruled not by this committee but by a rider to an appropriations bill. 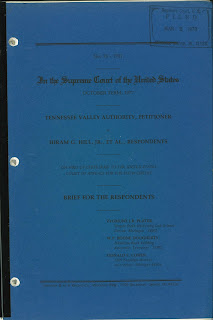 The book is accompanied by a digital archive on the Digital Commons of the Boston College Law School that includes photos, court and government documents, and more.